Angie Thomas’ debut novel, The Hate U Give was hands down one of my favorite books that I read in 2018. So, when her second novel, One The Come Up, was one of the options for this month’s selection, I knew that I had to go with that. 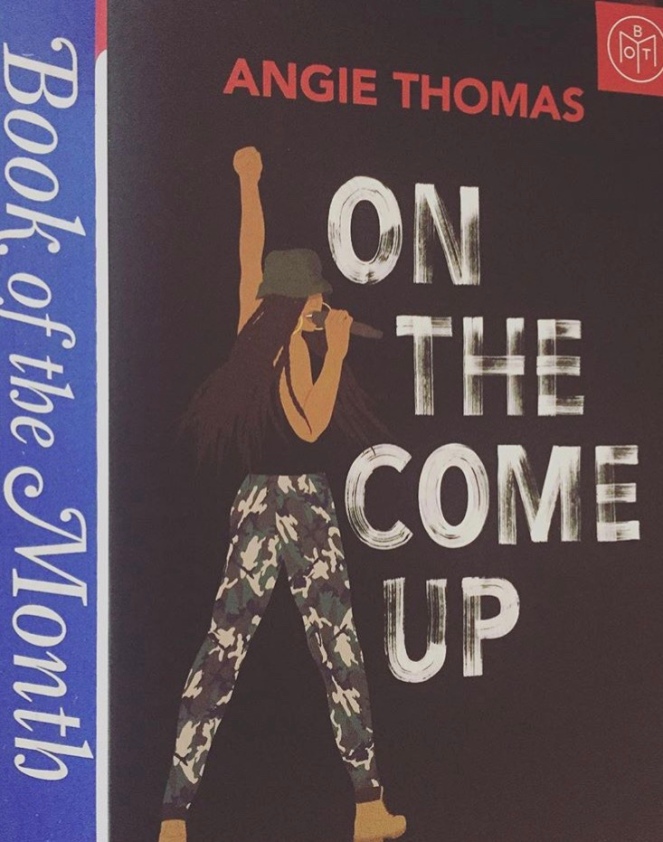 The novel is about 16 year old Brianna, “Bri” Jackson who has dreams to become a rapper. Bri is the daughter of an underground rap legend, and inherited his talents. We are introduced to her as she heads to a rap battle — one that shows off her massive talent.

After her win, Bri records her first song, On The Come Up. The song soon becomes viral, which then puts Bri on the news — but not for the reasons that she hoped. Soon enough, Bri has to decide what is really important.

Meanwhile, struggles await her at home. Her brother Trey, a college graduate, is struggling to find a job and works at a pizza shop to help support their family. Her mom, Jay, is a former drug addict that is struggling to find work after losing her job — leading them down a rabbit hole of poverty and struggle.

I’m going to be honest — I absolutely loved this book. Angie Thomas has a talent of creating genuine characters, which makes it enjoyable to read. You see this in their dialogues with each other, their intra personal relationships and the way they perceive the world. Furthermore, in this novel, you see it more in the musical references. From Notorious B. I. G to NAS, this novel is full of them. I liked it because it gave the reader an insider’s look at how the hip hop world works. That is something that I thought really worked for this novel.

Furthermore, I also loved the subplots of all of the relationships with the characters — whether it may be with Bri and her aunt, Bri and her friends, and Bri with her brother. There is so much to be explored here, including a platonic friendship that has a one-sided crush, and how she was witnessing her aunt fall into the trap of an illegal lifestyle.

However, what I also liked seeing was Bri’s relationship with her mom, Jay. Bri’s mom is a former drug addict, her addiction being the result of dealing with the pain of her late father. I feel like over the course of the novel that we witness their bond growing stronger — especially as they experience trials and hardships.

In addition, I really enjoyed reading about the relationship between Aunt Pooh and Bri. Aunt Pooh was one of the few that truly indulged Bri and her dream to become a rapper. She fueled her with the music that has become her influences. She bought her to her first battle and was named her manager. This relationship is one of the key in the book as well, and something I liked.

Overall, I thought this was an excellent novel and a great successor to The Hate U Give. Angie Thomas is the kind of author that helps you think about the issues in a way that you can relate. And, in this novel, it shows. Therefore, this novel is definitely one to read for all of you young adult readers out there.

One of the most important things that we humans can do for ourselves is self care. And, we live in a society where self care is absolutely necessary. Between the added technology, lines blur. With that, you are expected to have that mentality that you are constantly available — whether that means that you are expected to answer an email or just be readily available for any time a text comes through.

Needless to say, taking time for yourself is even more important than ever before. However, it’s not always that easy — you have a ton of responsibilities both personal and professional. And of course, those come with obligations.

One of the biggest commitments we have? Our relationships with our significant others. I think it is important to respect the fact that sometimes we need a break — not from each other, but from life. Every now and then, we need a night at home binge watching Netflix, knitting or just relaxing.

Ever see that episode of Gilmore Girls where Rory had the house to herself because Lorelei went to a retreat with Emily and all she wanted to do was sit at home and watch TV with Indian food? However, Dean still tries to see — and completely ignoring her wishes. That, my friends is something that we should not do. It’s important to hear our partners — especially when they are saying hey I need a night to myself.

However, many people may panic and think that it’s a sign that you don’t love your partner anymore. That couldn’t be farther from the truth. It’s normal not to want to go out sometimes. It’s normal to have the desire to spend time with you. Why? Because it’s important to spend time making sure you’re okay — and that you take care of yourself to be a better partner as well.

The take home message here is to always make sure both you and your partner are taking care of yourselves. And the bigger take home? To make sure you listen to them when they say that they need it.

Self care is important, folks. Make sure you promote it within your personal relationships as well.

In elementary school, Valentine’s Day was the one day where we were permitted to eat chocolate from the final ring from the bell until dismissal. However, in middle and high school, Valentine’s Day was the one day a year when there was some sort of hope in the air. Hope that the object of your affection would somehow magically reciprocate your feelings. Hope that you would get a rose that was delivered by students. Hope that someone would make you swoon just once.

Nowadays, Valentine’s Day is a bit different for me — especially seeing that I am an adult and all. This is my second Valentine’s Day in a relationship with the same person. While it’s just another day at work, it’s still a day where I appreciate my boyfriend who I am very lucky to have.

Up until that point, I never had a valentine. That is, unless you count my dog. As much as I was secure in my single status, I still hated February 14th because I had to log into my social media accounts to see a tribute to everyone’s significant other. It would often leave me wondering, wait, where’s mine? The only good thing was that I could go to CVS the next day and gorge myself on discount chocolate. And, of course I treated myself to something, since I was my own Valentine.

With that being said, Valentine’s Day is a strange day. It’s a day where you tell your significant other — or someone that you hope will be your significant other — how much you love them. But, what? Shouldn’t you tell them that everyday? Well, yeah. Only on Valentine’s Day, you have the pressure to do it with candy hearts, a trip to the jewelry store and roses. And, of course some kind of romance.

Yup. It’s one of the most commercial holidays of the year.

But, seeing it from the perspective of someone who is in a happy relationship, I can say that my valentine is pretty great (even though we actually aren’t seeing each other today due to conflicting work schedules).

And, there is more to Valentine’s Day then what you see in the movies. Quoting Taylor Swift, there is still some “magic in the air.” Maybe that magic is faded a bit as you get older, but at the end of the day, Valentine’s Day is still a day filled with love. Which is the best kind of magic there is. 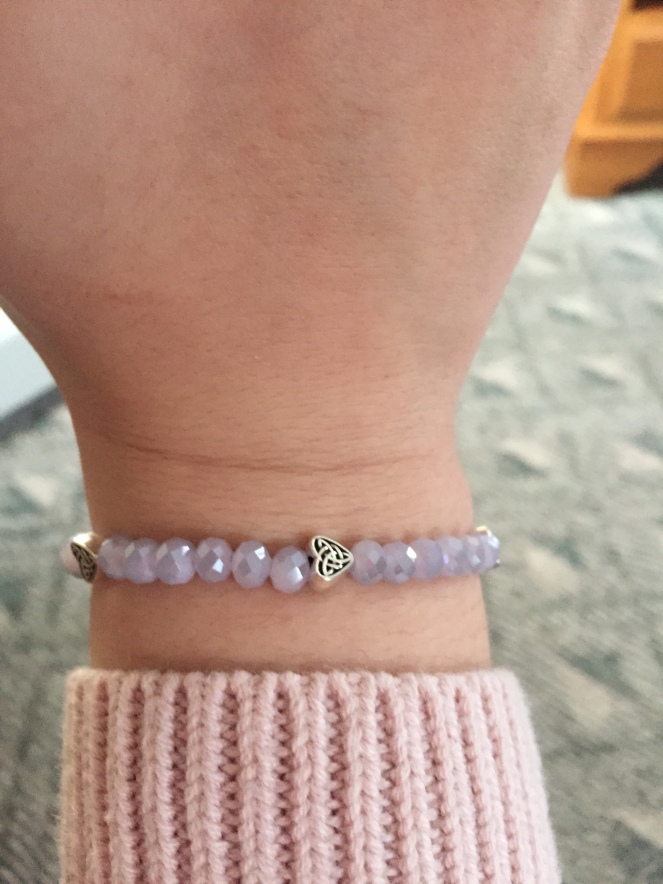 Lately, I have been obsessed with making these heart bracelets, which are perfect for Valentine’s Day! And the funny thing? I discovered this design on a fluke when I was making a bracelet for a co-worker. However, I like it enough to make it one of my new go-tos. So, in honor of tomorrow being Valentine’s Day, here’s how to make the bracelet. And it’s inexpensive, and a great gift for your ladies for Valentine’s Day.

Cut a piece of elastic that is about two inches longer than the desired length.

Put on the first heart on the string.

Follow the heart with 4-6 crystal beads, depending on how far apart that you want the beads.

Repeat until you have as many heart beads as desired.

Once the bracelet is the length you’d like it, tie a knot and cut the strings off. And you’re done!